THE OLD CINEMA in Bansko 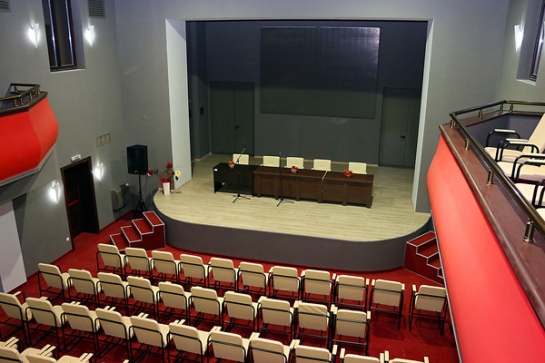 The city of Bansko has played an important role for our formation and establishment as a nation during the age of the National Revival. The settlement has been established as one of the cultural centers in Bulgaria. Here prominent public figures active in culture, enlightenment and literature were born, among whom we can distinguish the names of Neofit Rilski, Toma Vishanov-Molera, Nikola Vaptsarov, Paisiy Hilendarski, etc.

Today, under the stern look of Paisiy Hilendarski’s monument on Vazrazhdane Square, the building of the tourist information center is located, which is more popular among the local inhabitants as “The Old Cinema”. The building is erected in 1929 and has hosted Razvitie community center for many years. All local events, meetings, theaters, film shows have been organized there.

There and then, the building has hosted a library, rehearsal halls for amateur theater group, guitar and mandolin orchestra and singing and dancing folklore groups, as well as a theater hall that functions as a cinema with more than 200 seats after the removal of the community center, a cash desk and camera room. In 1937, film show equipment is delivered by a German company, and Ivan Hadzhiruskov has helped for the provision of films. People here remember the Russian films “Seven Bold People” and “The Pig Girl and the Shepherd”, and the western films with Romy Schneider. One of the first cameramen is Petar Grachenov followed by Tsane Kadev, Georgi Erini and Ivan Ulevinov, and Kostadin Popstefanov and Georgi Yovkin are a teller and a ticket seller.

We should note that the first films shown in Bansko have been silent films, and the shows have been organized in the building of the ex Balkantourist, before the establishment of the cinema building.

About more than a year ago, the traditions of the “Old Cinema” are revived and it is transformed in Tourist Information Center with rich tourist and cultural activity.