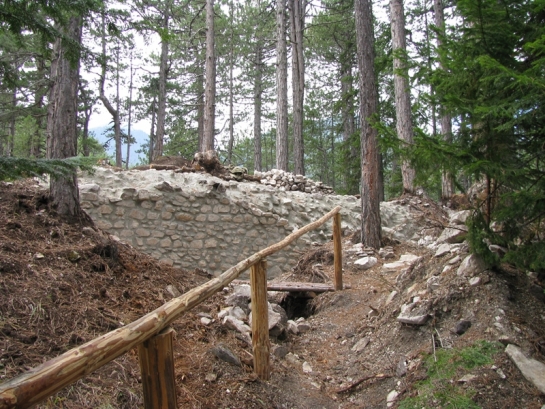 Archeological studies in Kalyata location start in 2013 when the late antiquity fortress Sitan Kale is found. The first data about the fortress are provided by the Byzantine chronicler Kedrin /end of 11th – beginning of 12th century AD/, who says: “Sitan is an impressive city...” – a proof for the great number of inhabitants in the settlement for the time being. According to its purpose, the fortress has secured the Razlog valley, but at the same time it has served as a connection point with fortresses from the other side of the Pirin Mountain – Melnik, St. Vrach /Sandanski/, etc. The fortified settlement is located at altitude of 1300 m on the territory of Pirin National Park and is 3,5 km away southwards from Bansko. It is erected on a hill surrounded by almost vertical slopes now overgrown by centuries-old trees. According to the observations, it comprises an area of about 10 decares. Parts of the east and the north wall with the citadel gate are found, which are made of processed lime stones fixed with lime mortar and about 1,80 – 2,00 m thick. A round tower aimed at guarding the gate is erected in the northeastern corner. Plenty of fragments of everyday and construction ceramics, glass fragments, iron objects, arrows, spears, ornaments, etc. are found. The coins found until now make us suggest to a great level of certainty that the settlement has been inhabited during the period 3rd – 14th century AD. Within a project under the Regional Development Operational Program, a part of the found fortification wall has been restored and conserved. The fortified settlement can be accessed along well established tourist path secured with wooden railings. Information signs are installed and recreation nooks are also arranged.

Most of the artifacts found are arranged in an archeological collection exhibited in the Radonova House Historic and Ethnographic Complex in the city of Bansko.

View the embedded image gallery online at:
https://www.visit-bansko.bg/en/what-to-see/archaeological-sites/item/3967-late-antiquity-fortress-sitan-kale#sigProGalleriad638f8bd0a
More in this category: « St. Nikola archeological complex
back to top