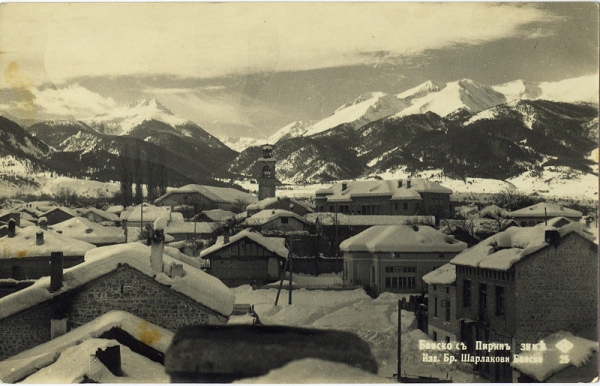 Bansko has long ago become famous for its rich and varied cultural and historical heritage that has played an important role for the establishment of the Bulgarian values and has left a distinguished trace in our overall growth as a state. The evidence for its active participation in the powerful upsurge of the nation during the National Revival is undoubted, but its history ismuch more ancient and its beginning is hidden somewhere back in centuries.

Information for the development of the region during earlier ages can be found in the archeological excavations and studies. More than 100 sites put on the archeological map of Bulgaria are registered in the region. One of them is Sitan Kale /Kalyata/ - a fortress inhabited yet by the Thracians that has reached its apogee during the ancient times and during the early Middle Ages and has existed until falling under Ottoman Yoke. This is where the local population gives its last resistance against the Ottoman invaders.

It is understood that Bansko has been established as a settlement by the unification of several neighbourhoods. The first documentary evidence for Bansko is found in the Ottoman registers of cattle-drovers (dzelepkeshani) (sheep breeders) of 1576.

Until the 18th century, the inhabitants of Bansko are mainly stock farmers and craftsmen who rely on the vast pastures and rich forests. During the period of the National Revival, Bansko develops as an urban trade and crafts center. A lot of mills, sawmills, fulling-mills, tabakhanas for leather tanning, etc. are erected along the Glazne River. Its enterprising inhabitants maintain trade relations with settlements along the Aegean coast, from Central and Western Europe. Caravans with carpentry, leather and hardware goods start to the Aegean Sea region – in Serres and Drama, to carry back cotton, fish, tobacco, opium, olives, unprocessed and processed leathers. Trade offices of Bansko citizens open doors in a number of European cities – Budapest, Vienna, Leipzig, Marcelle, London. Many of the children of wealthy families study abroad.

Extended contacts with the outer world dating back from the 18th century give an impetus for the national consciousness and make Bansko and the region one of the foci of the Bulgarian National Revival. Bansko is the birth place of its founder and author of Istoriya Slavyanobolgarskaya, Paisiy Hilendarski (1722-1773). During the same period the famous Bulgarian enlightener Neofit Rilski (1793-1881) – a monk, teacher, architect, musicologist, poet and artist, a man with encyclopedic knowledge and interests, called “the patriarch of the Bulgarian teachers and men of letters”, was also born and live here. Toma Vishanov Hadzhiikonomov – Molera (1750), is the founder of an artistic school with a great contribution to the development of the national traditions in the religious fine art, Marko Teodorovich Vezyov (1760-1840) – trader, publisher and education activist. Here, we should mention that the brothers Dimitar (1874) and Kostadin (1876) Molerov – folklorists and regional ethnographers, descendents of the famous Molerorvs family, and many other were born in Bansko.

Bansko is the birth place of Nikola Yonkov Vaptsarov (1909-1942) – a genius Bulgarian poet of world class and importance.

The economic and spiritual upsurge during the 18th century, and especially during the 19th century, can be also seen in the acts of the local self-governance of the village of Bansko of that time. About 1850 the Bansko Bulgarian Municipality is found as continuation of the Village Public Council for the Construction and Painting of the St. Trinity Church (erected in 1835 and consecrated in 1837) established in 1833. Influential representatives of the trade and crafts society become members of the governing board of the municipality. In 1835 the Church Board buys the house of Pande Hadzhistenov and appoints secular peopleto teach there according to the new education system, i.e. in the model of the first secular school in Bulgaria found during the same year in the city of Gabrovo. Later on, the teacher Nikola Popfilipov becomes worthy continuer of the impressive educational work of Neofit Rilski in Bansko. Upon initiative of the Bansko Bulgarian Municipality and with the generous support of Marko Georgievich, in 1857 a new school building is erected, the school with a monitorial educational system is reconstructed in a class school, Bulgarian Revival newspapers and books are disseminated. The municipality organizes the construction of the bell-tower of the St. Trinity Church in 1850 and the installation of the clock mechanism in 1866. During the 60s and the 70s of the 19th century, the Bansko Bulgarian Municipality stands at the head of the fight against Greek church authorities for independence of the Bulgarian church and for development of the educational work in the settlement. The municipality materially supports the families that have suffered damages during the suppression of the Kresna-Razlog Uprising and of the Ilinden Uprising and undertakes a number of other public initiatives after the Liberation from the Ottoman presence in 1912.

The economic welfare also affects the features of the national residential architecture of the 18th and 19th century. Made of stone, the rich wealthy houses “have monumental fortification appearance. This mainly distinguishes them from the residential architecture in the other settlements in the region of Razlog” (R. Angelova). In addition to these features, we should mention the outstanding woodcarving and wall-painting decoration, which proves not only the material abilities, but also the high artistic culture of the citizens of Bansko. Characteristic examples for the early local construction tradition are the Hadzhivalchanova, Hadzhiruskova and Velyanova Houses. The Velyanova, Sirleshtova, Todeva, Zagorchina, Dzhidzheva, Zlateva, Koyuva, Stefanova Houses, etc. are distinguished for their architectural merits and rich artistic decoration.

In the light of the topic for the spiritual development during this period, we should mention that Bansko is the first Bulgarian city where protestant communities are established during the second half of the 19th century. Still in the 60s of the 19th century, i.e. before the appearance of protestant missioners hereabouts, an evangelic community exists here found by the orthodox priest Dimitar Mladenov and the local teacher Nikola Popfilipov. On 06.08.1868 the Bulgarian Evangelic Church Municipality is established in Bansko, which is also considered the birth date of the first protestant church in Bulgaria.

At the end of the 19th and at the beginning of the 20th century, Bansko is the biggest settlement in the Razlog district. In the work “Macedonia. Ethnography and Statistics” of Vasil Kanchov we can see that in 1900 “6500 Bulgarian Christians live there”.

During this period Bansko becomes a center of the national fights for liberation. Kresna-Razlog Uprising (1878 – 1879) is an attempt to liberate the Kresna-Razlog valley that has remained within the borders of the Ottoman Empire by virtue of the decisions of the Berlin Congress (1878). Almost the entire local population takes part in the uprising that has temporary success – the so called “Seven Days’ Kingdom of Razlog” was found with its center in Bansko. The suppression of the uprising is accompanied by terror of the population.

In 1896, during Gotse Delchev’s teaching period in Bansko, the settlement becomes a district center of the Internal Macedonian Revolutionary Organization (IMRO) and an important unit within the conspiratorial committee network. The culmination of the National Liberation movement within the region is the Ilinden Uprising (1903). The Bansko citizens take active part in the liberation process. We should distinguish the feat of the local teacher Radon Todev and its group who die during the uprising in the Godlevska Mountain.

The territory of the present municipality is included in the borders of Bulgaria in 1912. Bansko is liberated on the 5th of October during the same year with the help of the group of Hristo Chernopeev and the other joint groups of the nine voivodes. The voivode-poet, Peyo Yavorov also takes part in the fights for national liberation of that time. The elected five-member’ municipal government of Bansko, with Asen Todev as the first mayor, also takes part within the structure of the state-administrative system established in the country.

After the First World War, the main livelihood in Bansko is agriculture, stock farming, timber production for construction and carpentry – production of furniture and other daily goods. Along the river of Glazne, there have been a lot of lathes, cog wheels, combers, water-mills and a mill. During that time the city has 4550 inhabitants.